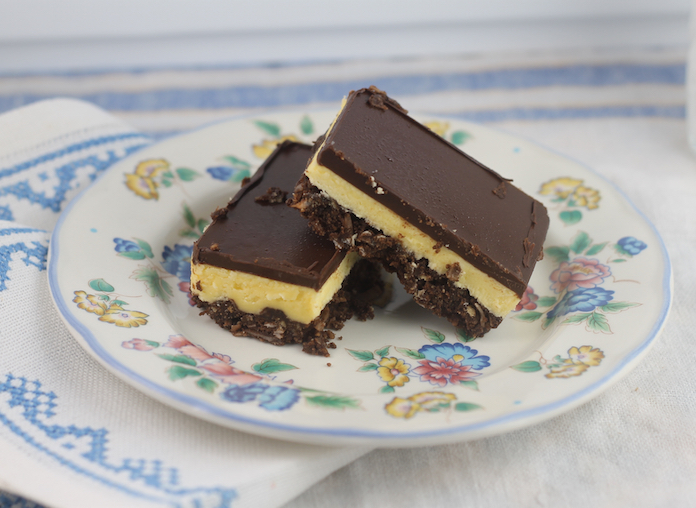 Even if you have never heard of Nanaimo Bars, you’ve probably tasted one. This classic no bake bar cookie hails from Canada. It’s named after the city of Nanaimo, British Columbia.

Now, that doesn’t tell you much about the recipe. It’s made of a cookie crumb crust topped by a pudding mixture that’s thick enough to cut when the bars are cold, and topped by another layer of melted chocolate.

The pudding mix really adds a nice flavor and mouthfeel (what we call texture) to this simple recipe. It’s a great recipe to make with kids, and easy enough so they can make it on their own, once they are old enough to be trusted with the stovetop.

This is my version of Nanaimo Bars. I have never really been a fan of bitter chocolate, so I like to add milk chocolate chips to the top layer, and use chocolate cookie crumbs instead of graham cracker crumbs to the bottom layer. Enjoy every bite.

Tips for the best Nanaimo Bars:

Linda is a bestselling cookbook author and home economist who has written 50 books (49 cookbooks and Medical Ethics for Dummies) since 2005. She has worked for Pillsbury since 1988, on the Bake-Off and other projects. Linda has been a web presence since 2002, developing recipes and teaching people how to cook.