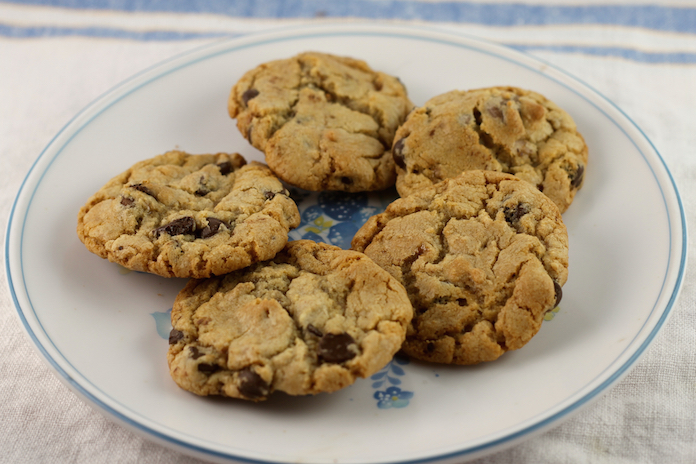 You may not know it, but there has been quite a debate in the foodie world about how to make the best chocolate chip cookies. Should you use more flour? Less? Should the butter be used in solid form, or should it be melted? Is browned butter better? If you brown the butter, should it be chilled again, or used in its liquid form? How many eggs does a cookie recipe need? Should the egg whites be left out?

My contribution to the controversy borrowed from the famous Mrs. Field’s Cookies recipe story. You remember – that recipe made the rounds a few years ago because of an urban legend. The story is that a woman requested the recipe for these fabulous chocolate chip cookies from Neiman Marcus. The company sent it to her, and allegedly billed her $250. So she vowed to spread the recipe far and wide as revenge.

That story is not true of course, but the legend lives on. That recipe used ground oatmeal in the cookies and added a grated Hershey bar. Those ingredients are known as “finely divided solids” in the food world. They act as emulsifiers, making the recipe smoother.

But after a conversation with my husband, I thought I could go one better. How about adding ground toffee bits to the recipe? And to increase the caramel flavor, I browned the butter and used it while it was still liquid and melted. Another egg yolk stops the ground toffee from making the cookies hard.

Wow! The cookies are wonderful. It was hard to restrain ourselves from eating the whole batch. Try them and see for yourself.